The more spacious, comfortable, and greener models made by Hitachi Rail are due to enter service on the West Coast Main Line in 2022. They will replace the current diesel-powered Super Voyagers and serve the West Midlands, North Wales and Liverpool.

The aluminium shells landed in the UK this week by sea at Southampton docks from Hitachi Rail’s Kasado factory in Japan, ahead of the train building work that will start at Hitachi’s Newton Aycliffe plant later this year.

While initial empty body shells of the Bi-Mode fleet will be sent from Japan, the Avanti West Coast order marks an important change in Hitachi’s train building approach. 56 body shells will be fully welded together in the North East, marking an exciting new chapter for Hitachi’s factory, where £8.5million is being invested to allow the full build of trains to take place in the UK. The final assembly, where all components and electrics are fitted, of the entire fleet will take place at the Newton Aycliffe facility.

“Our new trains are really going to make a difference and it’s very exciting,” explained Liam Hockings, Senior Project Manager, New Trains for Avanti West Coast. “Together with our partners Hitachi Rail and Rock Rail West Coast, we will be looking to raise the bar for our customers on the West Coast Main Line route.” 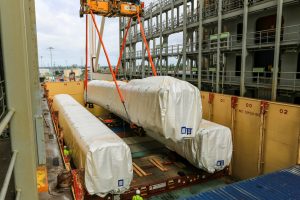 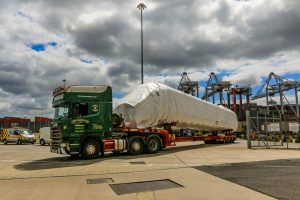